Notes on Doctor Who and history: ‘Marco Polo’ 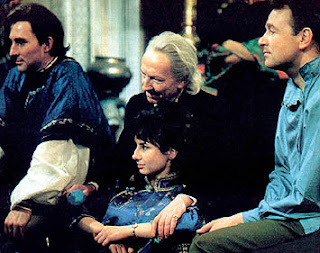 (I’ve fallen behind on my Doctor Who rewatch, but I’m going to try to get back on track, and will have some more of these posts.)
And so we come to Doctor Who’s first proper historical, ‘proper’ in that it was actually set in history rather than prehistory, as had been the case for the last three episodes of ‘An Unearthly Child’.
It’s sometimes said (though generally by people whose knowledge of the show is fairly casual) that Doctor Who in its early days chose periods for its historicals based on what was being taught in schools, or on what could most easily be catered for out of the BBC costumes and props stores. Neither theory really stands up in the light of what Doctor Who actually broadcast in terms of historicals in its first two years. If either notion held true, then there ought to have been a different set of historical periods visited.

I haven’t done too much research into what was being taught in history classes in schools in the early 1960s, and I suspect that, in those pre-National Curriculum days, there was quite a lot of variety. But it seems likely to me that a lot of it centred around Our Island Story, the sort of history satirised in 1066 and All That. This was a history that took pupils through Roman Britain, the Anglo-Saxon settlement, the Norman Conquest, Tudors and Stuarts, the Industrial Revolution, and the British Empire. Doctor Who, at least in its first year, had none of this. Only in the last historical of the first season was a period shown that might have been taught widely in British schools, and then it was the French Revolution. Not until 1965 did the first English king appear, Richard I in ‘The Crusade’, and even when English and British history did feature, it did not dominate the historical periods the show visited until the era of John Nathan-Turner (1980–1989). True, there had been a plan to do a Roman Britain story in the first season; but that was in the event never made, and in any case, it focussed upon the end of Roman Britain, rather than more obvious events such as the invasion of Julius Caesar or the Boudican revolt.

As for the BBC and its stores, the Beeb had produced a number of costume dramas through the 1950s and early 1960s, though its glory days in this area still lay in the future. The backbone of the classic serial at this time, as it continued to be later, was the nineteenth-century novel, primarily Charles Dickens and Jane Austen, but also William Makepeace Thackeray (Thomas Hardy and Anthony Trollope would follow later). Additionally, the BBC had made The Age of Kings, adapting Shakespeare’s history plays. If the BBC were out to save money on Doctor Who, one might expect the periods depicted in these programmes to be represented in the show’s output. But again, they’re not. The Doctor didn’t visit the nineteenth century until one episode of ‘The Chase’ in 1965, and then not again until ‘Evil of the Daleks’ in 1967.

The period most commonly represented on television in the early 1960s, largely through broadcasts of movies, was the Second World War. This is a topic Doctor Who steered well clear of, at least in terms of direct reference, until the Master dropped a doodlebug on UNIT in ‘The Time Monster’ (1972). (This is not the place to discuss the role of the Second World War in shaping various aspects of the show; I discuss one element of that in ‘“Went the Day of the Daleks well?” An investigation into the role of invasion narratives in shaping 1950s and 1960s British television Science Fiction, as shown in Quatermass, Doctor Who and UFO’.) It is of course perfectly possible, perhaps even likely, that some of the costumes for ‘The Reign of Terror’ had previously been used in the BBC’s 1957 production of Dickens’ A Tale of Two Cities; but it seems likely that the production team chose a period and then went to see what was available in stores, rather than deciding the setting on the basis of the BBC’s holdings.

If anything, Doctor Who seems to have deliberately gone out of its way to showcase historical periods that would not be familiar to the viewers, either from other television programmes or from their education. David Whitaker, indeed, was explicit about this, at least in terms of not duplicating other television (in a 1963 memo quoted by James Chapman, Inside the TARDIS, p. 22). Part of this may have been a desire not to turn the historicals into something that felt too much like work to schoolchildren watching. It is interesting to note the list of potential subjects that John Crockett, a staff director with the BBC, put together in 1963, as he was preparing to direct one episode of ‘Marco Polo’ (he later directed all four episodes of ‘The Aztecs’). This was sent to David Whitaker, and is quoted by Chapman (Inside the TARDIS, p. 224). They are mostly British-based, with such topics as the Peasants' Revolt, the Spanish Armada, and Boadicea (i.e. Boudica), but Crockett also included such topics as the fall of the Egyptian Pharaoh Akhenaten. Only four of the settings Crockett put forward were actually taken up by the show, and none of those before 1965. Whitaker evidently had other ideas.

‘Marco Polo’ is a case in point. Gavin Burrows of Lucid Frenzy Junior (who likes this story considerably less than I do, though his post on the story is very insightful) has said to me that the early historicals were often the opposition of educational, setting out to reinforce audience prejudices. You can make that argument for the portrayal of the Stone Age in ‘An Unearthly Child’, and it’s certainly the case for some of the later historicals, as I’ll discuss in later posts in this series. But I'm not sure if it’s true for the carefully-researched stories of John Lucarotti, who penned this Doctor Who serial (and Gav agrees).

For their first true historical, the production team chose not the nineteenth century, or any period of British history, but the story of a medieval Italian who had ended up on the other side of the world. The BBC had made a radio serial in 1955 called The Three Journeys of  Marco Polo, written by John Lucarotti. But as far as I am aware, no television version of his story had been made by the BBC. Nor was he likely to be studied in any depth at school. No doubt Marco Polo was familiar to the audience as a name, perhaps through magazine articles or the occasional television feature, with a vague understanding of what he had done. But he would not have been as well-known a figure as Sir Francis Drake or Richard the Lionheart; hence there is a conversation in an early episode in which he establishes his backstory for the benefit of viewers.

Doctor Who deliberately chose to take the viewer to a non-European setting, to thirteenth-century China, albeit with a European as chief mediator of that world for the Doctor and his companions. Of course, being the BBC of the early 1960s, this is a China populated by British and European actors made up to look Chinese, with half-Burmese Zienia Merton being the only actual speaking Asian on set.

Barbara the history teacher really comes to the fore here. It is Barbara who recognises Polo, and is able to supply her companions with a few useful pointers about his background. However, she clearly doesn’t know everything, and other characters such as Polo and Ping-Cho (Merton), are needed to further the knowledge available. The background to the assassins whom the travellers will encounter, for example, is provided in a story told by Ping-Cho, further commented on by Polo. (Ian, meanwhile, parallels Barbara by giving science lessons about condensation and the like; but somehow Ian’s lessons come across as much more irritating.)

The standard format for a historical, or indeed any, story of early Who is that the TARDIS and its crew arrive in a setting. Complications then ensue, usually involving the crew being separated from the TARDIS; when the Doctor was less of a moral crusader, such a separation was necessary to prevent him just dropping back into the TARDIS and flying off. From these complications our travellers must extricate themselves by the story’s end. ‘Marco Polo’ sort of follows that format, except for two things. Firstly, as Gav says, the TARDIS (from which the Doctor is only separated for part of the story; for the rest he can't leave because it is broken) is the McGuffin that drives the story; and secondly, ‘Marco Polo’ looks at the format from the other side. Instead of being centred around the Doctor, the story revolves around Marco Polo himself (Mark Eden), and how he deals with the complications and opportunities that the TARDIS crew bring in; this is perhaps why the story came to be called ‘Marco Polo’, rather than its original title of ‘Journey to Cathay’.* It is Polo who delivers bridging narration (this is a story that takes place over a longer period than is typical for historicals), and it's entirely appropriate to the structure of the story that Polo gets the final line, after the TARDIS has left. Polo is even the one who got the Radio Times cover (along with the Doctor and Derren Nesbit’s Mongol warlord Tegana), the show’s first. (One wonders if the story would have felt quite the same had illness not kept William Hartnell mostly out of the second episode.)

One final point to make about ‘Marco Polo’ is the lavish set design (by Barry Newbery) and costumes, almost all of them specially made for this serial. Those of us who watched Doctor Who in the 1980s will remember it as a period when the BBC seemed almost embarrassed to be making the show. This was not the case in 1964. ‘Marco Polo’ may not have been a Classic Serial, but it was treated as if it were, and made with exactly the same level of attention to detail.

(A sidenote: I have not yet done more than skimmed Dene October’s Black Archive volume on ‘Marco Polo’, but it's there on my TBR pile.)

* One must be careful not to read too much into this, however; overall story titles at this point were not broadcast, and were primarily for production staff; as a consequence, they tend to be descriptive. Titles for stories before overall story titles started being used onscreen (which began with ‘The Savages’ in 1966) did not really become fixed until the 1970s (hence the multiple different titles in circulation for ‘The Daleks’).

Just to note - there was a 1962 Italian peplum called Marco Polo. This had a British release, and may have been fairly fresh in the memories of the Doctor Who production team in late 1963.