which means (filling in the gaps):

To the spirits of the departed. Insus, son of Vodullus, citizen of the Treveri, cavalryman of the Ala Augusta, curator [a junior officer] of the troop of Victor. Domitia [made this?].

But what I want to talk about is a comment by Stephen Bull, the Museum's curator of Military History and Archaeology. He says:

To depict him in such a dramatic and war-like position, when none of the other tombstones of this period show such a thing, makes it very likely that we are looking at something either real, or very similar to an event that happened.

I find that a very curious thing to say. Because this sort of image, of a cavalryman riding down a barbarian, is not uncommon on Roman tombstones. As it happens, I've been making student assignments on this sort of image over the weekend. This, for example, is the tombstone of Flavinus from Hexham Abbey: 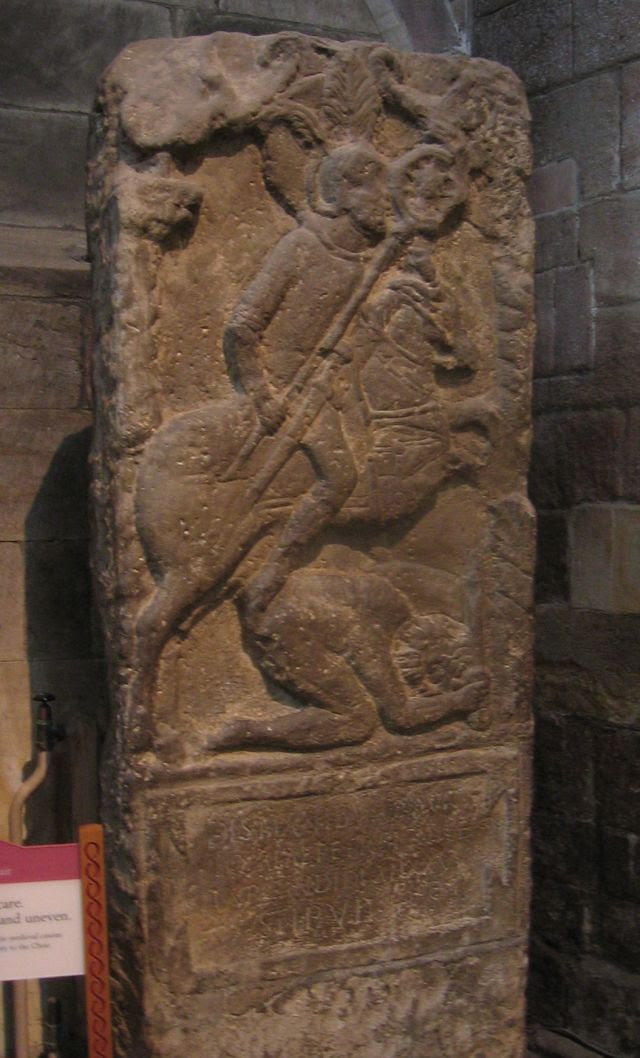 Other examples I can think of are those of Longinus Sdapeze from Colchester, Rufus Sita from Gloucester, and Sextus Valerius Genialis from Cirencester. It's also found in non-funerary contexts. This is a detail from a distance slab put up by the II Legion Augusta on the Antonine Wall, found in Bridgeness and now in the National Museum of Scotland, where I was admiring it on Saturday: According to this report, there are a dozen such reliefs that have been found in the UK. The beheading shown on the tombstone of Insus does appear to be unique. But is there any need to see this as anything more than a variation on a theme? Is it even necessary to connect it with Celtic head cults, as David Shotter does? Real events were sometimes depicted on tombstones, as, for example, when Tiberius Claudius Maximus depicted his encounter with the dying Dacian king Decebalus. But he also added a detailed text explaining the event. This is not the case with Insus.

Some of Bull's other comments (e.g. "The carving and inscription will add detail to what we know about the Roman auxiliary cavalry and its equipment.") seem perfectly sensible. What I think has happened here is that he has succumbed to the temptation to 'sex the story up' by suggesting that there is an actual event being depicted, rather than just generic imagery. It's the same motivation, to make things more concrete, that is behind suggesting that a Roman bust is of Julius Caesar when there isn't really any evidence.

But perhaps I'm being unfair. Perhaps Bull (an expert in 20th century military history and that of the English Civil War) has addressed these issues. He has written a pamphlet on the tombstone, which I'll be following up. If nothing else, I want to know what he thinks about Domitia. A lot of tombstones have text at the end suggesting that the soldier's heirs (usually fellow soldiers) set the tombstone up. Sometimes it's someone else. Here it's Domitia. Who was she? soldiers weren't officially allowed to marry, but often had common law wives. Is that who Domitia was?

* There's a nice picture of the inscription on this webpage, though their translation is a bit odd.
Posted by Tony Keen at 9:29 PM 2 comments:

I found this image in the Bridgeman Education database.

What sort of emergency?