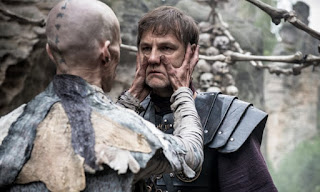 Episode 2 of Britannia fills out more about the motivations of the characters. We discover why King Pellenor hates his daughter (her great-grandfather on her mother's side was a Roman). We see more of Zoë Wanamaker's Queen Antedia, who gets a nice joint scenery-chewing moment with David Morrissey's Aulus Plautius. We see more of her tribe, the Regni, and find that they make liberal use of woad and have lots of women warriors, so that's those two obligatory elements ticked off. We also find that she hates the Cantii because Pellenor's daughter castrated her son on their wedding night (which she demonstrates by having her son drop trou in front of Aulus).

Morrissey as Aulus continues to chew the scenery wherever it is to be found. In this episode he orders crucifixions of prisoners, to show what a nasty man he is (but he doesn't have them nailed into position, so he can't be all that bad), and then traumatises a small child. Ian McDiarmid as Pellenor is starting to chew the scenery a bit himself, though internal political and family machinations at Crugdunon remain not terribly interesting. 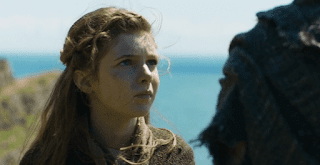 Meanwhile, NotArya and NotTheHound have an Expository Walk. He then manages to get rid of her, and she ends up being chased by wolves. (Well, actually, she is chased by huskies, which is exactly the same except when they catch you they lick you to death.)

But some strange things are happening. In this episode Vespasian gets killed. I had assumed that this was the Vespasian, who was, after all, there in historical reality, but survived and nearly forty years later became emperor. So either this isn't the historical figure, but just someone of the same name (which seems odd, as it's a strange name to pick - Antonius, Brutus, I can see, but Vespasian?), or the Butterworths are going full Quentin Tarantino Inglorious Basterds alternate history on us, in which case, all bets are very definitely off.

And right at the end of the episode, Aulus visits the DruidCave (it's not actually a cave, but it might as well be), and takes a trip (in many senses) to the Underworld. This show may be rather more intriguing and less predictable than I thought.

Link to all reviews of Britannia.
Posted by Tony Keen at 9:29 PM No comments: 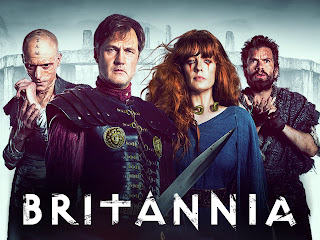 Okay, I should have caught up with this ages ago. But with the new season due next week, and my planning on really getting stuck into the 'Screening Britannia' project in November, it's time I did actually watch all this.

The first thing a viewer sees when watching Britannia is a caption that says:

IN 55 BC JULIUS CAESAR INVADED BRITANNIA

HE CAME FACE TO FACE WITH ANOTHER LEGEND ...

And the next caption says:

Those of us of a certain age and disposition are probably expecting that the next caption will be 'NO-ONE KNOWS WHO THEY WERE OR WHAT THEY WERE DOING', and the dulcid tones of Spinal Tap's 'Stonehenge' will then be heard. But, of course Britannia isn't that sort of show at all - it's a serious drama. And then the titles play out to Donovan's 'Hurdy Gurdy Man', and you realise that maybe it is that sort of show after all.

When it was broadcast in early 2018, Brtiannia was accompanied by a lot of high expectations. After all, this was award-winning playwright Jez Buttorworth, author of Jerusalem, wasn't it? Well, yes - but it's also Jez and Tom Butterworth, screenwriters for odd cod-Arthuriana The Last Legion, a movie deeply uncertain about its own identity.

Britannia does one very interesting thing. As Juliette Harrisson and I shall discuss in the book we're writing together, most cinematic and television versions of the Roman invasion of Britain are interested in Julius Caesar's invasion, not that of the emperor Claudius nearly ninety years later. And they are almost without exception, comedies (e.g. Carry on Cleo or Asterix in Britain). Britannia is very definitely about the Claudian invasion - the only other screen example of this I've been able to find is 'Pritain', the first episode of the 1974-1975 BBC series Churchill's People. And Britannia is certainly not sold as a comedy.

There's also something a bit odd going on in terms of diversity. The Romans are clearly the bad guys here - this is not to say that the Britons are necessarily the good guys, as they are too caught up in internecine murder, kidnapping and warfare for that, but the Romans are the imperialist invaders who massacre an entire village that was doing nothing more offensive than getting stoned at a massive Solstice party, so they are definitely bad. Yet it is among the Romans that one finds ethnic diversity, with black and Asian soldiers, and it is from these soldiers that the only significant working class voices emerge. Now, that is quite possibly true to the actual ethnic and class make-up of a Roman army, but one wonders what purpose it serves dramatically. Is the intention to elicit some sympathy for the Roman point of view?

The Britons, on the other hand, whilst beating the Romans in terms of gender diversity - there is a complete absence of female voices on the Roman side - are remarkably white and middle-class, occasional Irish person aside, such that one imagines that when not trying to bump each other off they sit round the hillforts doing Guardian crosswords and forbidding their children to watch ITV. This is epitomised by a somewhat careworn Julian Rhind-Tutt, who is just a bit ... well, a bit too Julian Rhind-Tutt to convince as an Iron Age Man of Kent.

These points of interest aside, Britannia is mostly cliché. There's a neat trick where the character set up to be one of the audience's points-of-view fails to make it out of the first episode, but even that's not all that original. Aside from that, the Romans are all gruff legionaries, the British villagers simple farmers with a close resemblance to the peasants of Monty Python and the Holy Grail, the local Druids are like Native American Shamen, and purveyors of New Age Woo, whilst at a higher level they're rather more sinister, led by Mackenzie Crook's Veran, made up to look like a Batman villain.

Britannia's biggest weakness, of course, is what got it made in the first place - its potential to be the next Game of Thrones, and therefore its tendency to lean in the direction of HBO's series. So there is much swearing, though in a remarkable act of restraint, no female nudity until fifty-five minutes in (compare Troy: Fall of a City, which had boobies after only five minutes). The Cantii's 'citadel' (rather than hillfort) of Crugdunon clearly went through several drafts where the designers were asked to make it more Game of Thrones-y, until the result doesn't look exactly like Winterfell, but would feel oddly familiar to any Starks visiting. And Nikolaj Lie Kaas' Outcast Druid and Eleanor Worthington-Cox's Cait, the pubescent girl he rescues from a massacre and is then contemptuous of, are so painfully NotArya and NotTheHound that it's slightly surprising legal action wasn't taken.

The problem that Britannia has which Game of Thrones didn't, of course, is that the audience knows the outcome. Whatever the various Britons may do, the Romans are here to stay, at least for the next four hundred years. The bad guys are going to win. (This may shed light on why the invasion is often treated as a comedy.)

The salvation of Britannia is that every ten or twenty minutes or so, David Morrissey as Roman commander Aulus Plautius turns up and chews every bit of scenery in sight, in a way that you have never seen him do before. This is not the nuanced Morrissey of Sense and Sensibility or The City and the City - this is full-on Alan-Rickman-as-the-Sheriff-of-Nottingham scenery chewing, as he flings his dead-mink decorated coat around his shoulders, advises legionaries to take a dump on the landscape, or say things like 'let's get on that fucking boat'. I have high hopes that he will be matched by Zoë Wanamaker's Queen Antedia, arriving as she does is a smoke cloud apparently of her own generation and sporting a wig that deserves its own star billing, but we haven't really seen enough of her yet. And Ian McDiarmid, as the improbably-named king Pellenor, seems to be keeping his scenery chewing in reserve for The Rise of Skywalker.

Still, this is only episode 1 - let's see what the next eight deliver.

My collaborator on 'Screening Britannia', Juliette Harrisson, has also reviewed the first episode.

Link to all reviews of Britannia.
Posted by Tony Keen at 12:00 PM No comments: