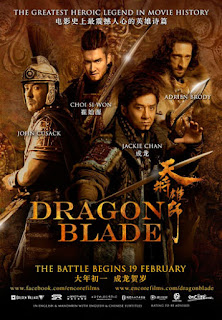 Dragon Blade, an epic tale of Chinese and Romans on the Silk Road, has been an enormous hit in China. In the UK, it's come out with little in the way of publicity, in a very limited cinema release, and been largely ignored by any critic who isn't Mark Kermode. Sure enough, when I went to see it, I was the only person in the cinema. Which is a shame, because whilst being utter, utter nonsense, it's actually rather fabulously enjoyable, if you like Jackie Chan movies and/or wuxia, Chinese historical martial arts epics. Which I do.

Jackie Chan is Huo An, head of the Silk Road Protection Squad, a sort of Han Dynasty UN peacekeeping force. After an encounter with a Hunnish force in which he accidentally ends up married to Lin Peng's Cold Moon (that's her character's name), which is awkward as he is already married, he and his team are framed for smuggling and condemned with other prisoners to rebuild the destroyed city of Wild Geese Gate, on the western edges of China. Then, out of the mist, comes a Roman legion led by John Cusack's Lucius, fleeing Tiberius Crassus (Adrien Brody), with Tiberius' young nephew Publius in tow.

Let's get this clear - though the movie is heavily indebted to Gladiator in the way it represents Romans, for some of its shots, and for elements of its plot structure (and has one obvious steal from the third Lord of the Rings movie), this is not a Hollywood East-meets-West film such as Shanghai Noon or Rush Hour. It is very much a wuxia epic, and is steeped in the grammar of Chinese, rather than Western, cinema. This particularly shows through in the the way it is very unsentimental about its cast, a feature of the genre I had forgotten. Very few named individuals are still standing at the end, and there are at least two things that happen to major characters here that I just can't imagine taking place in a Hollywood movie.

Historically, of course, the movie is complete rubbish. It begins with a series of captions that places the action in the context of Marcus Licinius Crassus' disastrous Parthian expedition of 55-53 BC (a prologue that featured modern archaeologists finding a Roman city on the Silk Road has been cut for the UK release), and claims to be inspired by true events - but the inspiration is clearly very loose. The mise-en-scène is that of the Roman Empire rather than the Republic - one of the interesting things about this movie is seeing how Chinese cinema represents Romans, their cities and their armour, which is not quite how Hollywood does it. And there's even a moral, which is that all ethnic communities of China are capable of working together, and can achieve great things when they do, a message bound to go down well in Beijing. (It is to be noted that everyone speaks in their own native dialect, except the Romans, who speak English, though they do sing Latin.)

There are some ... interesting performances by the western actors involved. Adrien Brody chews the scenery like it's coated in addictive substances. And then there's John Cusack. Cusack is one of my favourite Hollywood actors, and he's made a number of great movies - Grosse Pointe Blank and High Fidelity leap to mind. This, however, is not his finest hour, and he seems thoroughly miscast. I can only assume that he is a massive fan of Jackie Chan and really wanted to be in one of his movies.

And absolutely this is a Chan vehicle, and full of all the sort of things that one has come to expect from Chan's Chinese movies - much martial arts, quite a lot of humour, some tragedy and a story that does make you care about the fates of the main characters. It's not as good a Chan movie as, say, Who Am I? Nor is it anything like as good a historical epic as Zhang Yimou's Hero, and bears no comparison to the newly-released elegaic, atmospheric, and partly plot-free The Assassin. But I was smiling all the way through Dragon Blade. I mean, how can you not like a movie in which an Indian cavalry force attacks to the sound of massed dutars? Catch it on DVD (where perhaps the prologue will be restored) or Video On Demand, if you can.
Posted by Tony Keen at 5:09 PM 1 comment: