Gods in The Bowlers?

On Monday I went to Tate Britain's 'Queer British Art' exhibition. It's a bit of a curate's egg. The Victorian room, which is what I went for, is splendid (though inevitably made me miss my late colleague Rosemary Barrow, especially the presence of Evelyn de Morgan's Aurora Triumphans - Rosemary was a big de Morgan fan), but after that the exhibition loses its way. There are nice bits - Angus McBean's portrait of Beatrix Lehmann (which I recently saw used by John J. Johnston in a talk on archaeology in Doctor Who), some of Aubrey Beardsley's illustrations for Lysistrata, Ethel Walker's The Excursion of Nausicaa - but it doesn't really hang together, there's an awful lot of reaching and this-perhaps-can-be-read-as-queer-ing, and the final room of David Hockney and Francis Bacon just made me think they had an extra room and didn't know what to do with it. It feels like the 'queer' rooms of half-a-dozen different exhibitions, all stuck together.* 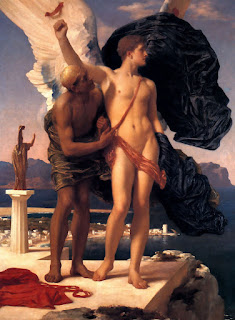 There is, of course, a lot of Classical Reception, especially in the first room, but also elsewhere. As is usual these days, I was particularly looking out for images of Minerva. There's one in Frederick Leighton's Daedalus and Icarus, or at least there's what is obviously a statue of Minerva viewed from behind.

I thought that I'd found another in William Blake Richmond's 1870 painting The Bowlers (illustrated above), a painting that was scandalous at the time for the amount of nude and semi-dressed males and females it contained. There is a figure I noted in armour and Corinthian helmet. But then I realized that this figure was among one of the groups of males, and males and females are clearly segregated in the painting. So this is simply a figure dressed in Greek armour. 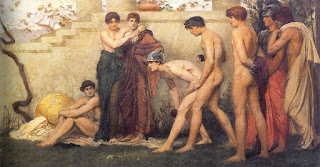 And then I looked again at the other male figures around this one (see the detail). The figure getting ready to bowl has the winged helmet of Mercury. That behind wears the vine leaves of Bacchus. The hooded figure at the back looks reminiscent of someone, though I'm not sure who (Hades?). So could the armoured figure be a form of Minerva after all? I'm not sure - I certainly haven't been able to find any commentary on this online. But I'm definitely going to see if Rosemary said anything about it.

* On the other hand, 'The Art of Ray Harryhausen', also on at the Tate, is a rather splendid little free display, that puts ideas in my head that I can use for teaching, and is highly recommended, especially for students taking modules on Classics and cinema.
Posted by Tony Keen at 6:22 PM No comments: