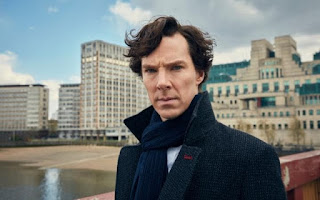 (It's impossible to talk about 'The Six Thatchers' without including spoilers. Hence, there are spoilers here, eventually.)

So now we get the other Steven Moffat series that's been off the screens for exactly a year. How did this one fare? Well, it was probably better than Doctor Who; as the first episode of a new season, it is perforce more substantial than the throwaways that Doctor Who Christmas episodes seem to be now. And it was certainly better than the self-indulgent mess that was last year's 'The Abominable Bride'.

Indeed, there are quite a few moments in 'The Six Thatchers' that remind us of why we became fans of Sherlock in the first place. If Mark Gatiss' script tends to assume that the audience likes the characters, rather than giving them reasons for doing so, it nevertheless has a number of good jokes and quite a lot of clever dialogue. Some scenes definitely had me smiling. There's a neat twist on the original 'Adventure of the Six Napoleons', though one might feel Margaret Thatcher is still perhaps too divisive a character to be used in this role - many will relish the smashing up of her image, others will be offended by it.

Benedict Cumberbatch is very much back on form. Other performances, however, with one exception, are a bit muted. There are some other problems - there's an opening scene, largely designed to get the writers out of a hole they shouldn't have got into in the first place, in which Sherlock appears to have been possessed by the spirit of Peter Capaldi's Twelfth Doctor. And, given the reliance of the show on the John Le Carré international espionage aesthetic for a number of sequences, it's unfortunate, if beyond the showrunners' control, that television audiences have in 2016 been exposed to real Le Carré in the form of The Night Manager, which does this sort of thing so much better. (Incidentally, the 2016 edition of Le Carré's novel includes a fascinating afterword on the experience of seeing his book filmed.) 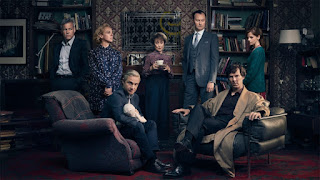 But overall, 'The Six Thatchers' was doing okay. And then it fell at the final hurdle. And here come the spoilers.

The other first rate performance in this episode is, of course, that of Amanda Abbington. Finally, she gets to convince the viewers that Mary Watson really is a superspy and international woman of mystery. But she's only given this leeway because it's her last opportunity.

That Sherlock would eventually fridge Mary was not exactly unexpected, not least because Arthur Conan Doyle killed off his own Mary. I was quite surprised that she made it through Season 3. The moment that the contents of the last Thatcher turns out to be an AGRA data stick rather than the expected pearl, it's clear that she won't be alive by the end of the episode.

But, as with the death of Osgood in the Doctor Who episode 'Death in Heaven', the creators seemed to feel that they had to kill the character off, but couldn't work out how to do it properly. In this case, Mary's death is pretty contrived. I was expecting the villain Norbury instead of shooting Sherlock to shoot the tank in the aquarium, which would have been a surprising, if unrealistic scene - but this was probably beyond the show's budget. More seriously, Mary seems to need some sort of super-speed to actually get in front of the bullet fired at Sherlock, given that she doesn't respond until it's already left the pistol barrel.

The disappointment here is that there was an opportunity here to subvert genre tropes, but instead the creators chose to lazily follow them. They probably take the view that Sherlock is ultimately about the relationship between men, and women get in the way of that (an inherent drawback of a 130-year old franchise, that can be overcome, but only if creators make an effort). And so we will get at least ninety minutes of John Watson's manpain.
Posted by Tony Keen at 11:38 PM No comments: 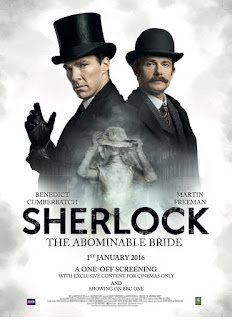 [Another review from the archives, of last New Year's Sherlock.]

When I saw the trailer for 'The Abominable Bride', I wondered if this might actually be Benedict Cumberbatch playing Sir Arthur Conan Doyle's Sherlock Holmes for once. Of course, that doesn't happen - instead we get the usual much less likeable, much more arrogant and often bullying version that we've seen for three seasons of Sherlock.

Nor do Steven Moffat and Mark Gatiss go the whole hog and do an actual Victorian Alternate Universe version of the show - instead, this is all going on in Sherlock's mind, and is therefore of no real consequence. It takes place in the immediate follow-up to the end of Season 3, where Sherlock had committed murder largely because Moffat and Gatiss could find no other way out of the plot corner they had written themselves into, and then used the return of Jim 'Thighs' Moriarty, whom they seem to have turned into a supervillain, as a deus ex machina so that they could continue to make episodes. To be honest, I'd have preferred the AU.

As Dan Hartland observes, in a piece that's well worth reading in full, 'The Abominable Bride' is primarily an exercise in self-referentiality. It's oh-so-clever, down to the final scene that is meant to have you wondering whether it's the 2010s or 1890s Sherlock who is real. This is the same trick that Moffat pulls at the end of the Doctor Who episode 'Last Christmas', where a final tangerine implies that the Doctor and Clara Oswald are still dreaming (which may be a great get-out from the succeeding two years of continuity). The device was frankly old when Buffy the Vampire Slayer did it in 'Normal Again'. These days, I am past caring. 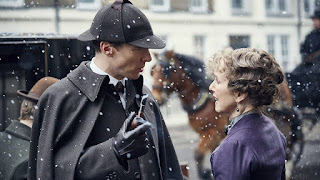 Neither do I care for the overly blokish 'look, we're feminists too' pronouncements with which the episode is littered, about as convincing as David Cameron saying that he really is on the side of the poor (though, as has been pointed out to me, if this is all in Sherlock's head, then the feminism is a priori going to be caricatured). But the biggest problem is that what there is not in this episode is much in the way of story, and what there is is pretty confused.

There are good performances, of course. In particular, Rupert Graves' slightly confused Inspector Lestrade works much more effectively in the Victorian context than in the twenty-first century, where one feels he would be rapidly sidelined from any real work. Martin Freeman as John Watson does well with a set of lines that seem designed to make him look as stupid as possible, the error made by the otherwise admirable Basil Rathbone/Nigel Bruce versions of Holmes and Watson. If this is what Sherlock actually thinks John Watson is like, and the words are not Watson's but Sherlock's imaginings of Watson's, then it's hard to see how their friendship survives.

But these performances are not enough. In short, 'The Abominable Bride' is a mess. A very pretty and professionally made mess, but, as with recent Doctor Who (though it is better than that), arguably evidence that the showrunners are out of ideas, and continuing to do the show merely out of habit.
Posted by Tony Keen at 3:54 PM No comments:

A new post (!) on the Swords, Sorcery, Sandals and Space blog! 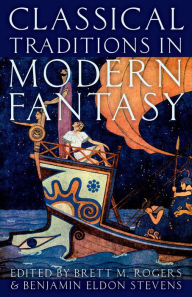 The Swords, Sorcery, Sandals and Space blog rises from slumber.
Posted by Tony Keen at 6:52 PM No comments: