(Spoilers. * indicates something watched/read for the first time.) 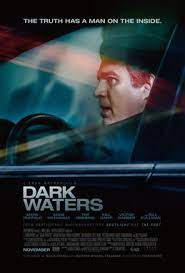 Virtual film club pick. Extremely well-made, but profoundly depressing and disturbing movie about the real-life DuPont chemical/PFOA scandal. You definitely get the feeling that American companies don't really care about the health implications when there's money to be made, and the health implications of PFOA are pretty universal. The movie perhaps spends too much time trying to get a conspiracy thriller vibe that it can't really deliver; but there are excellent performances from Mark Ruffalo as Rob Bilott, the lawyer at the centre of the case, and from Tim Robbins as his boss. The movie fakes, of course—the tension between Bilott and his wife (Anne Hathaway) seems a little too clichéd and movie-like—but this is an important movie you should see. It's also the first Todd Haynes movie I've seen since Velvet Goldmine (not that he's made a lot).

I got behind with doing this, so I am just going to list everything else.

12. Kieron Gillen and Jamie McKelvie, The Wicked + The Divine: The Faust Act (Reviewed—again, quite some time ago—here.)