Notes on Doctor Who and History: ‘The Keys of Marinus' 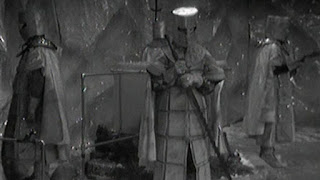 ‘Wait a minute,’ I hear you say, ‘“The Keys of Marinus” is a science fiction story, set on an alien planet, not in Earth’s history.’ Well, yes, that’s true, but there’s quite a lot here that relates to the show’s engagement with human history.

First of all, there’s the references. Barbara the history teacher is in action again, comparing the building they find on Marinus with the pyramids of Egypt and pre-Colombian America. (In his novelisation, Philip Hinchcliffe, in a somewhat sexist and implausible move, takes that line away from Barbara and gives it to Ian.) And we have the first occasion when the Doctor name-drops some historical character he’s met, in this case the somewhat obscure fourth/third-century BCE Greek philosopher Pyrrho of Elis. This sort of name-dropping will be taken to extremes in the Pertwee years.

And then there is the way in which the various locations of Marinus draw heavily, and not particularly subtly, on historical cultures. Morphoton, at least in its mirage form, looks like a Roman palace, with luxurious food and clothing all around. The next location feels more medieval, though with some classical-looking statues. The snow-and-ice covered location visited in episode 4, with its heavily armoured knights (shown), seems even more medieval, and harks back to Eisenstein's Alexander Nevsky (though now it looks more like Monty Python and the Holy Grail). Millennius feels rather like something out of Franz Kafka.

It is perhaps appropriate here to talk about Terry Nation’s planned ‘The Red Fort’. Replaced either by this, or by ‘The Reign of Terror’, or by ‘The Dalek Invasion of Earth’, depending on which version you believe,* the story was set in India, in the period of the British Raj. The Red Fort itself was (and is) a monument in Old Delhi, built as a palace for the Mughal emperors. In 1803 the East India Company took possession of the Fort after defeating the Maratha Empire, and one possibility, as Christopher Morley suggests, is that the story concerned these events. However, the Red Fort was occupied in 1857 by the Mughal emperor Bahadur Shah II, at the time of what was known in 1963 as the Indian Mutiny; documentation that exists makes it clear that this was the setting for Nation’s story. The story is one that concerned the British empire, and would have been the first British history story that the show had made. But this is still a relatively obscure part of British history, compared to others that could have been chosen. Unlike other lost stories, the scripts have never been published, and it may be that Nation never wrote much of them. One suspects that, whilst it might have been critical of certain members of the East India Company, it probably would not have overtly criticised the idea of British rule in India - that sort of anti-colonial material was some way off for Who. It might have been very controversial, given the South Asian population in the UK at the time (who presumably would not have been cast in main roles). Perhaps we are better off without this story.

Sandra Bond has alerted me to the fact that there is a 1957 episode of The Goon Show called 'The Red Fort', about exactly the same historical event! The first person to buy any material off Nation, supposedly, was Spike Milligan in 1955. Given that, and the fact that everybody listened to the Goons, Nation would certainly have known of this episode. This also suggests that the Red Fort and its role in the Mutiny was more prominent in the public consciousness in the early 1960s than it is now.

Alan Stevens suggests that Nation had anti-colonialist and socialist leanings, and might indeed have been very critical of the British in 'The Red Fort'.