The actor Christopher Plummer has died at the age of 91. He was a talented and versatile actor, often to be seen in the 1960s and 1970s in second-lead roles, yet never quite becoming the enormous star that he deserved to be. Here are five of my favourite performances. 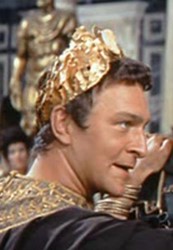 Immediately before he was lovable Austrian Georg von Trapp, Plummer played this very different figure in Anthony Mann's epic movie, his first big-screen appearance in six years (though he had built up a formidable reputation as a stage and television actor). Whilst thoughtful, the movie is too long. But Plummer's performance. atypical for him, is commanding—a mercurial, complex psychopath. I am undecided as to whether I prefer Plummer's Commodus to that of Joaquin Phoenix in Gladiator. The movie was a massive box-office flop, and so did nothing for his career. Fortunately the singing von Trapps came to his rescue.

I confess that I always have and always will love Battle of Britain. Plummer plays no-nonsense Squadron Leader Colin Harvey, one of four roles, along with Robert Shaw's unnamed Squadron Leader, Laurence Olivier's Air Marshal Sir Hugh Dowding and Trevor Howard's Air Vice-Marshall Keith Park, that give the movie its spine. Plummer also has to carry the main romantic subplot, as the pressures of the battle tear apart his marriage to Susannah York's Maggie. I don't know for certain, but I presume Plummer's is the role originally earmarked for Michael Caine, before scheduling conflicts forced him to take a smaller part. A testament to Plummer's success is that it's very hard to imagine Caine in the role. Instead, we end up wishing there was more Plummer.

Another sprawling epic, Sergei Bondarchuk brings Russian sensibilities to the multi-star war movie, and the result is all the better for it, in my view. Plummer is second lead again, as the Duke of Wellington, and he doesn't appear on screen until nearly forty minutes have passed. But once he strolls through into the Duchess of Richmond's ball, he absolutely steals the movie from Rod Steiger's Napoleon. No-one has encapsulated the essence of the Iron Duke the way Plummer does here. (Stephen Fry's Wellington is a great tour de force, but an entirely different approach.) Plummer's finest performance.

It's a brave man who steps into the shoes of David Niven, but this is precisely what Plummer does here, as retired gentleman thief Sir Charles Litton. Blake Edwards' '70s Panther movies are messy, and in some ways the best one can say about Return is that it's the least messy, but it does boast two great performances, from Catherine Schell as Lady Litton, and from Plummer. Plummer eschews any impersonation of Niven, and instead plays Litton as if he is a version of the Saint—and not Roger Moore's Simon Templar, but Leslie Charteris'. Why did no-one ever let him play that role for real? Murder by Decree (1979)Plummer's second go at Holmes has him investigating the Jack the Ripper murders, with a plot drawn from Stephen Knight's Jack the Ripper: The Final Solution. In my view, it's a lesser entry in the Holmes canon. James Mason's Watson seems too old for Plummer's Holmes, though Frank Finlay's Lestrade is perfect. In the pantheon of Holmes portrayals, i wouldn't place Plummer with the greats, Rathbone, Cushing, or Brett. But he's up there with other interesting interpretations such as Nicol Williamson and Robert Stephens, and far above the 'could you nots' of the likes of Richard Roxburgh and Rupert Everett. (I omit Douglas Wilmer from the greats only because I have not seen enough of his work in the role, and leave out Benedict Cumberbatch and Jonny Lee Miller because, for all the merits of their performances, neither is really playing Conan Doyle's detective.)
Honourable mentions go to Plummer's role as Rudyard Kipling in The Man Who Would Be King (1975), in which he's easily overlooked, as he's not in it very much, and the movie is so dominated by Connery and Caine; and from his 70s and 80s, when he developed a fine line in character parts, his Doctor Parnassus in Terry Gilliam's flawed but interesting The Imaginarium of Doctor Parnassus. Indeed, I can't remember seeing a performance by Plummer that was actively bad, which is more than I can say of a lot of actors. Even in Star Trek VI, where he is unapologetically chewing the scenery, he gives us a better class of chewing the scenery.
RIP.
Posted by Tony Keen at 4:49 PM