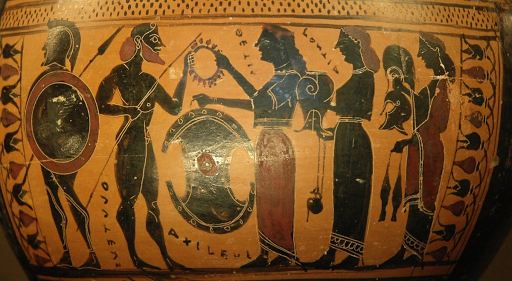 I gave a paper on Thursday at the Historical Fictions Research Network's annual conference; my paper was on 'Trojan Catastrophe: The Fall of Ilium on Screen'. As part of that, I listed my Modern Adaptation of the Trojan War Tropes, something that I developed when doing Troy (2004) as a #ClassicsTwitterMovie, and refined in connection with another project that has, for the time being, been set aside. Some interest was expressed in these tropes, so I thought I would make more widely available the full list. I should emphasise that not every modern retelling of the Trojan War, or aspects of it, ticks off every trope, though there are some (e.g. Troy) that get the full set.
1. The Trojan War is treated as a historical event.
This has two sub-tropes:
a. The gods do not play an active part in events, and almost all elements of the fantastic are removed.
b. There is a serious political/military/economic reason for the Trojan War, and Helen is just an excuse.

2. The whole story of the Trojan War shall be told.
3. Helen of Troy is blond.

4. Helen must have a good reason for leaving Menelaus.

5. The design of the Late Bronze Age is historically eclectic.

6. Achilles and Patroclus are Not Gay.

7. We don't talk about Iphigenia.

8. The Greeks are the bad guys.
At some point I shall write this up as a proper article, but for now, have this on me.
Posted by Tony Keen at 11:26 AM