Doctor Who, 'The Return of Doctor Mysterio' 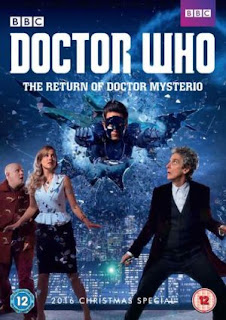 Round my place, watching the Doctor Who Christmas Special and then saying 'Oh dear' has become as much a tradition of Christmas as sprouts and arguing over Trivial Pursuit. Truth to tell, last year I wasn't able to engage in that quite as much as previously. And this year, I have to say I did this even less. Hell, 'The Return of Doctor Mysterio' is okay - arguably Peter Capaldi's best special. But does that mean it's actually any good?

There are definitely good things about it. Capaldi's performance is becoming progressively more appealing. Steven Moffat's ability to write excellent dialogue, well-remembered from Coupling, but something that has got a bit obscured at times on Who, is particularly on display here - the words positively crackle at times, and some bits are laugh-out-loud funny. There are some great bits, especially the scene with Mr Huffle, played well by Capaldi and Charity Wakefield. Matt Lucas, despite essentially portraying Matt Lucas, works quite well as a foil for the Doctor, loosened from the shackles of Clara Oswald - and also demonstrates that the Doctor did care about the fate of those cannibalized into the Hydroflax (one assumes he restored Ramone as well). It will be nice to see more of him, though one assumes that he will depart fairly soon after the arrival of new female companion Bill (who seems very much in the mould of RTD companions such as Rose Tyler and Donna Noble rather than that of Amy Pond or Clara). And 'The Return of Doctor Mysterio' is certainly a story that's not opaque to anyone who hasn't seen the last three years of the show, thus enabling it to act as an entry point for new viewers.

And yet. And yet, at the risk of sounding like a grinch in the face of good reviews in the press and a Facebook feed full of friends saying how much they enjoyed this, concerns remain. Concerns that the alien invasion plot, part Spearhead from Space, part 'Partners in Crime' and part Independence Day, is a bit hackneyed, really. Concerns about the callous way the Doctor doesn't even attempt to save Brock, or feel bad about not being able to do so. Concerns that there are good ideas here, but they're often poorly executed. That things happen solely for a quick effect (e.g. Grant calling someone he's known since childhood by her married name, for no other reason than to surprise the audience once we see who she is; and why does the Ghost need to take the picnic basket into the stratosphere when it's destine for no further away than the roof of the building he lives in?). That the central romance is a bit stalkery, in the way of all good Hollywood romances. That even by the 1960s superhero stories had mostly given up pretending that you can bring a spaceship to an instantaneous stop without turning it and its contents to mush. That this sort of playful but respectful updating of the superhero genre is better done in the Christopher Reeve Superman movies (to which 'The Return of Doctor Mysterio' plays explicit homage) or, more recently, in the Marvel Cinematic Universe. 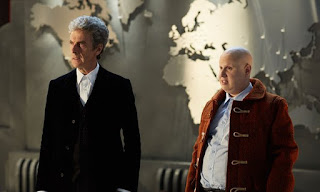 And is just okay good enough anyway? Aside from the Doctor's cameo in Class, this is the first Doctor Who in over a year. It really needs to come back firing on all cylinders. There are hints that there is a growing faction within the BBC that, as in the 1980s, sees Doctor Who as something forced upon them rather than something that they want to make. Depending on which rumours you believe, these forces may be demanding that Capaldi goes after the next series. As it happens, I expect Capaldi to go anyway* - there are precedents for coinciding a new producer with a new Doctor - not just Moffat and Matt Smith, but (more-or-less) Barrie Letts and Jon Pertwee, and Philip Hinchcliffe and Tom Baker. In any case, by the end of 2017 Capaldi will have done three series over four years, the same period in the role as David Tennant or Matt Smith. Perhaps firmer evidence for internal BBC hostility, if still anecdotal, is that I don't recall seeing a single trailer for 'The Return of Doctor Mysterio', whereas trailers for Sherlock are inescapable. In that context, Doctor Who really needs to assert its place in television's schedules, and I'm not sure 'The Return of Doctor Mysterio' does that.

So, the best special of the Moffat era, probably. But I can't see 'The Return of Doctor Mysterio' carving out a place for itself amongst the greats of the show.

(For a far more sympathetic response to the episode, read Matthew Kilburn here.)

* But then I never expected him to be cast in the first place, so what do I know?
Posted by Tony Keen at 3:10 PM