Doctor Who, 'The Husbands of River Song' 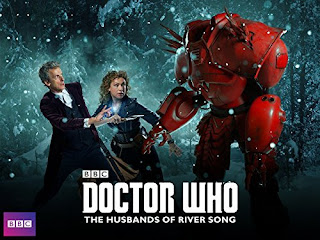 [This is another old Doctor Who Christmas special review. It includes spoilers.]

Though I haven't talked much about it of late, it's no particular secret amongst my friends that I am not a great fan of Steven Moffat's Doctor Who, especially not the last few years. I didn't really care for the first Peter Capaldi series, and whilst the second has been better, I still wouldn't follow some of my friends in declaring it the best series since Who returned. It's certainly the best series involving Clara, but that's quite a low bar.

On the positive side, Capaldi is settling into the role quite nicely, in contrast to the first series, where he was as patronising as Jon Pertwee's Doctor and as manipulative as Sylvester McCoy's, but lacked the charm of either. And the Doctor and Clara Oswald are at least no longer lying to each other, which is pleasing. But the series veered from moments that were actually quite clever (some of the stuff with Davros, and the misdirection achieved through the use of the word 'me') to moments that were so arch that you just wanted to slap everyone involved (e.g. every moment that involved a guitar). And Moffat's writing has become the equivalent of Murray Gold's music - it beats you around the head with the emotion that you are supposed to be feeling, and just in case you didn't get the message, it does it again. (The most egregious example of this is the Eternal Death Scene of Clara Oswald.) 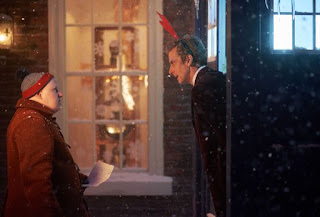 Nor have I been much of a fan of the Christmas specials. In contrast to the 1970s, when BBC Christmas specials meant pulling out all the stops and topping anything that had been done in the rest of the year, nowadays the idea seems to be that, as the audience will be half-cut and sleeping off Christmas dinner, it isn't necessary to try too hard. This has resulted in a number of 'specials' that have been incredibly lazy ('The Doctor, The Widow and the Wardrobe'; see The Terrible Zodin, issue 13, pp. 80-82), or at worst utterly incoherent ('The Time of the Doctor').

So I approached 'The Husbands of River Song' with some trepidation; my inner response to Moffat's question 'what could be more special than the return of Alex Kingston as Professor River Song?' was 'hang on, I'll get you a list.' But actually, there were moments in this where I actually smiled, and was enjoying the interplay between Capaldi and Alex Kingston. There were also moments when I was thinking "oh, get on with it", of course. And it's quite true, as Matthew Kilburn notes, that this episode had a lighter tone that was out of kilter with the rest of this season. As I only just finished catching up with the previous episodes just before Christmas, this tonal shift towards comedy, emphasized by the casting (and slight wasting) of comic actors, was particularly notable. But overall, this was okay. I'm certainly prepared to agree with those who say that it was the best Christmas special for a while - though that is a pretty low bar. And however much I enjoyed it, there is still a nagging feeling that this is a series preoccupied by glitz and flash over story, presided over by a showrunner running out of ideas, who really ought to move on.
Posted by Tony Keen at 11:36 PM