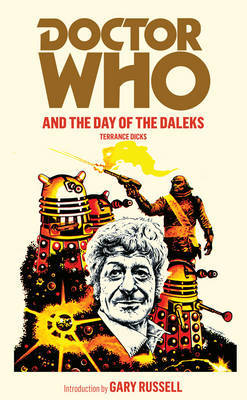 I grew up with Terrance Dicks' version of Doctor Who. Though I have a couple of fleeting memories of the Troughton era, it was in Jon Pertwee's tenure that I grew to love the show, and that remains my favourite era, for all its flaws. And Terrance is amongst the first writers of science fiction that I read, in the many novelizations of Doctor Who stories that I read. Though he became a bit formulaic when there was basically only him doing them and he was expected to churn them out month in, month out, the early ones, and to be fair, the later ones where he was concentrating on the era he'd script-edited, are excellent, and sometimes rather better than the original episodes. Doctor Who and the Day of the Daleks in particular is transformative.

I find it hard to mourn overmuch for a life lived long and well. But I did know Terrance Dicks a bit - we corresponded over an invitation to be a guest at a British Science Fiction Association London meeting, where he was charming, informative and very funny. I got him to sign my battered, well-read copy of Day of The Daleks. When his friend and collaborator Barrie Letts died, I sent Terrance a note of condolence, which he was gracious enough to reply to. Now he's died, and I don't know who to write to. So I'm writing to you all.
Posted by Tony Keen at 5:48 PM