February, as ever, saw the UCL Classics Play and the King's Greek Play. I actually haven't written about these for five years, partly because I haven't always got around to going, partly because I haven't found the time to write them up properly. This has ill-served some productions, such as UCL's splendid 2013 version of Trojan Women, which featured Lucy Chappell giving the best performance in the role of Andromache I've seen since Vanessa Redgrave in Michael Cacoyannis' movie version (Chappell is now, unsurprisingly, a professional actress, who appeared in The Theory of Everything). On the other hand, there were times in the past when I've been quite scathing, so perhaps some productions are glad of my silence.

But that is past - how about this year? 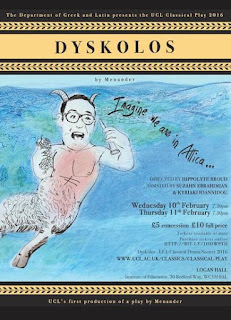 UCL bravely chose to break away from the usual fare of Euripides, Aristophanes and Aeschylus (it's been sixteen years since they last tackled Sophocles), and instead presented Menander's Dyskolos (The Misanthrope), about the only one of that playwright's texts in a good enough condition to stage. (Though there are lacunae, and rightly, this production made jokes about them.) The production had been hit by a number of problems, largely arising out of the prolonged closure of the Bloomsbury Theatre, which resulted in the production having to be restricted to just two performances.

But I can report that they did a pretty good job. A lot of this is down to a rather fine comic performance by Dominic Hauschild in the titular role of Knemon, the miserable misanthropic father. The production also innovated by casting women in a lot of the roles, such as the cook, and various other servants (i.e. slaves). It wasn't the best UCL production ever, but it was okay, and I'm prepared to take that for an innovative choice of text. 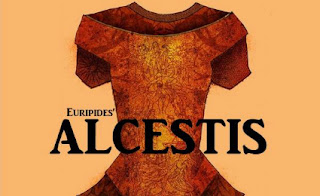 King's chose a less unusual play, Euripides' Alkestis. Edith Hall has some interesting things to say about the play, and how Admetus is rather unpleasant because of the speed with which he abandons his promise to dead wife not to marry again, as he is ignorant of the fact that his new wife is his old wife rescued from Death. In Admetus' defence, he is bullied into doing this by Heracles. Moreover, to a fifth century audience, this moment represents the restoration of normality, as a widower would be expected to remarry soon.

As for the production - well, my heart did sink a bit when I read two separate synopses in the programme book, one placing the play in ancient Pherae, and the other in 1957 London. But in the end, this blending of ancient and modern was not particularly intrusive, as the production was tied to Euripides' original text. In the end it just looked like a fairly standard modern dress production, with some nice ideas. For instance, Apollo was played by a woman, and in the version I saw, when Admetus' bride was brought back, it is in fact Apollo. Best of these was perhaps how the Chorus was handled. Instead of having them chant the lines, as would normally be the case, instead the Chorus danced, while Professor Michael Silk read the lines over the PA. It was an innovative approach. I'm not entirely sure it worked, and it did make the play seem very episodic as the stage went to black at the beginning and end of each choral scene. But King's deserves praise for trying. There was also some interesting use of music.

The performances ran the usual gamut from confident projection (Oliver de Montfalcon is pretty good as Admetus) to quiet monotone. And there was the usual problem with King's productions where the surtitles got out of sync with what was being said on stage, at one point quite badly.

I would say that while neither production massively impressed me this year, neither was really bad. And that's an okay result.
Posted by Tony Keen at 10:17 PM

I thought the use of the voiceover the the choruses in Alcestis just demonstrated the sheer difficulty of performing plays in Ancient Greek, a language that hasn't been spoken for centuries, performed by people who have at most been studying it for three years and that is patchily understood by the audience (especially those of us who don't happen to have read the relevant play). I mean, I love Greek tragedy and I struggle with it. So it's a heroic endeavour. I thought the voiceover was read brilliantly, but it showed up the efforts of the students, who had to act and speak Greek at the same time, and were just not as good. And once you've taken the choruses away from the Chorus, what is there for them to do? Some frankly not very good dancing. So although I enjoyed the production - I thought it had some good ideas, eg Apollo being female worked very well, and I didn't mind the ending, I thought it struggled to overcome the basic problems of doing Greek plays in the original.