Is this a trumpet I see before me? 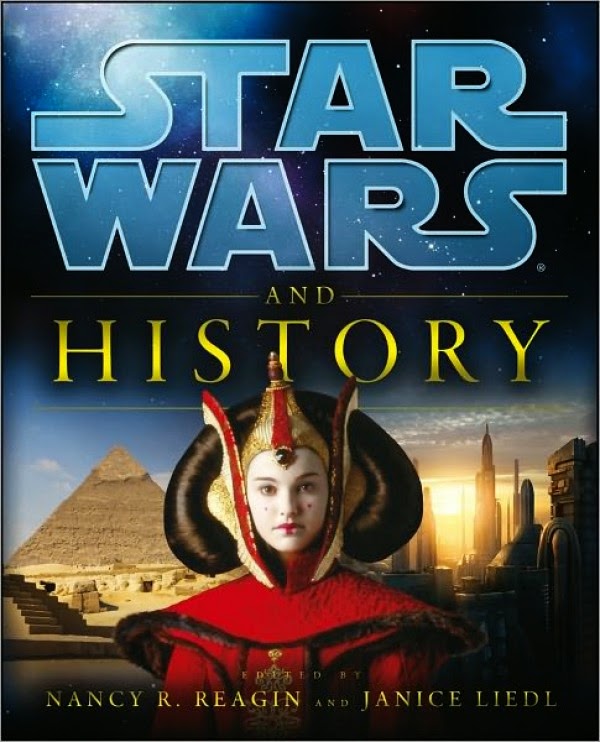 A couple of weeks ago I finally got my copy of Star Wars and History. This was actually published in November 2012, but for various reasons my complimentary copy got lost, and I didn't chase it up as I should have. I finally mentioned this to the editors, and they got on it very quickly. I got my copy in five days.

It's a handsome volume. In particular it's been very well-designed. I'm not sure I requested all the illustrations that are in there, but any that have been added by the editors were added with the greatest of sensitivity for my text. (There is a Kindle version available, but I really recommend the proper book to fully appreciate the design work.) There's a lot of Classical material in there, not just in my chapter. I wrote about historical dictators that could be paralleled to Palpatine, and in particular the moment when democracy slides into dictatorship, my examples being Augustus, Napoleon and Hitler (if I were redoing this, I would find more space for Julius Caesar, but I realised late on how important he was to George Lucas). That meant I got to find out a lot about Napoleon and Hitler - but I think what I wrote remains credible.

So I wrote to the editors, thanking them for getting on the case so quickly, and got the following in reply from Janice Liedel:

"Your chapter was a key piece in the collection. I know that George Lucas really loved it and it still gets a lot of comments from readers, especially teachers who're using the book in K-12 classrooms."

I am almost more pleased to find that the chapter is being used in schools than I am that George Lucas loves my work - but only almost. This is now the coolest thing that has ever happened to me, above having taught a former Formula 1 World Champion, having a label in the British Museum that reflects a piece of research I published, and having (I'm pretty certain) inspired a scene in The Archers.

As a consequence of deciding to blog about this, it occurs to me that I have been very remiss in trumpeting my other achievements over the past couple of years - this post means to correct that.

One thing I've talked about very little is the conference on the links between science fiction and fantasy and Greece and Rome that I organised last June. That was something that connected directly with my research interests, and was something I hoped would be a great success - and it was. I talked about it a little myself in an interview for Classics Confidential, about which I have spoken here on the blog. There are write-ups online by Liz Bourke, Cara Sheldrake, and Liz Gloyn, with another by Cat Wilson in Foundation 116 (alongside a piece by me setting out what I thought I had achieved with the conference).  There will be a collection of some of the papers appearing in Foundation 118 in the autumn. A version of Liz Gloyn's paper has already appeared in Strange Horizons, whilst a version of Jarrid Looney's is also online; A few more will be forthcoming from Strange Horizons by the end of the year. I have been trying to keep the course blog going as a source of relevant news, largely unsuccessfully since October, I'm afraid, though I do mean to get back to it. (I do have hopes for a further publication of papers, but I can't think about that just now, due to other committments.)

My major research publication in this field this year - there's only this and the Star Wars and History piece with a 2013 date on them - has been my contribution to Steven Green and Penny Goodman's Animating Antiquity: Harryhausen and the Classical Tradition. My paper is "Greek Elements in the Sinbad Movies of Ray Harryhausen: A Lesson in Reception". This paper connects with a theme I've been developing in my study of movies set in the Classical past - that you can't properly talk about movies with ancient settings if you're only talking about movies with ancient settings. (A related anecdote: I was on 6Music, suggesting a track for The Chain, and I was asked what I did. I mentioned that I taught Classical Studies, but that I'd also taught film and fantasy literature, and Stuart Maconie said "Ah, so the perfect thing for you would be to talk about Jason and the Argonauts". "As it happens," I said, "I'm writing an article about that.")

I have given a couple of research papers at the last two Classical Association Conferences, in 2013 on "Kipling’s centurion and Nesbit’s Caesar: Rome in Edwardian children’s fantasy" (an abstract can be found in this document), and in 2014 on "A Wild West Hero: Motifs of the Hollywood Western in the four Hadrian’s Wall movies" (an abstract can be found in this document). This last was part of a panel I organised called Across the Border: Four movies about Hadrian’s Wall, connected with the book I'm planning on co-writing with Juliette Harrisson, on Screening Roman Britain. Though I say so myself, it was a pretty cracking panel, with excellent contributions by Juliette, Liz Gloyn and Alex McAuley.

In January of 2013, I got made a Research Affiliate of the Open University, so I now have a staff page on their website. I wrote a couple of pieces for their OpenLearn website, one on Star Trek and the Greeks, and one on how Doctor Who engages with human history. This last post is linked to a wider project on Doctor Who and history that I'm part of, and have mentioned in a couple of places already. Amusingly, this piece apparently got mentioned in a paper at the Classical Association conference, but described as an OpenLearn course. It's not, though in fairness, that's sort of how the OpenLearn website presents the short papers that are put up on their website. And if anyone would like to commission me to create an online course on Doctor Who and ancient history, I'm certainly game.

On the subject of the good Doctor, I was invited to participate in a Locus Roundtable along with Graham Sleight on Doctor Who. You can hear that here. I very much regret interrupting Graham to be pedantic about the difference between Out of this World (pioneering ITV sf anthology series) and Out of the Unknown (essentially the same show, transferred over to the BBC), thus obscuring Graham's rather more important point, that Terry Nation was not, as he is sometimes characterised, a mere comedy writer chancing his arm at sf, but someone with a pedigree of writing science fiction for the small screen before he created the Daleks.

Related to this, I uploaded to Academia.edu a paper on invasion narratives in British sf television (specifically Quatermass, Doctor Who and UFO), which previously had been unpublished, having been written as my final assignment for an OU course on film and television history. In fact, I've updated my Academia.edu page with a lot of links, and some articles.  (And you might also be interested in the fact that there is now a Kindle version of The Mythological Dimensions of Neil Gaiman, in which I have a chapter.)

I also got asked through the OU to speak at the Southbank Centre's weekend on The Rest is Noise: Art of Fear. My topic was "Eisenstein and Stalin: The father of montage against socialist realism". I didn't know much about Eisenstein, but I wasn't going to turn down a chance to speak at the Southbank Centre, so I went away and researched the topic. The talk was recorded, and you can hear it here; there's also a photo of me delivering the talk.

I've branched out in teaching for other institutions as well. I will be doing my "Fantastic London" course for Middlesex University again this summer. I've also taught "Classics and Cinema" for the University of Roehampton in spring 2013 and spring 2014, and will be teaching "Myth and Mythology" for them in the autumn. And for the University of Notre Dame's London Undergraduate Programme I taught "London In The Literature of the Fantastic".  I enjoyed all of these, and seem to have done well - at Roehampton one response apparently was "Why can't all Visiting Lecturers be like Tony?"

I've also given a couple of papers on the work of Iain Banks. The first was "Genre Sensibility in the First Three Novels of Iain Banks", which I gave as part of the academic track at the brilliant Nine Worlds GeekFest (best convention of 2013 by a long way). This has been largely superseded now by a much better paper covering the same ground by Paul Kincaid in the latest issue of Foundation.  I also spoke at The State of the Culture: a One-Day Symposium on Iain M. Banks's Utopia, where I gave a paper on "Inversions as Planetary Romance".  These are both part of a project on Banks which has stalled a bit for the moment, but which I and a colleague will get going again soon. (I also wrote a short piece on my reaction to Banks' death for issue 351 of The Drink Tank.)

An old research topic reappeared in November. My friend Alan Greaves invited me to speak at the Mediterranean Archaeology Research Day: Ancient Lycia that he was organising. I was a bit dubious about this - I'd written a Ph.D. thesis, book and numerous articles and book chapters on Lycia in the 1990s, but really hadn't thought about the subject much in the present century, and didn't like the book I'd written much. So the paper I gave on "Dynastic Lycia 15 years on" was a bit of an oddity, and not quite what the audience were expecting - they were waiting to hear what new insights I had developed since writing the book. But it transpired from what others said that apparently my book is highly respected - "seminal" was Alan's comment - and I feel a lot better about it now than I did before. I don't think I'm going to go back to writing about Lycia - there's too much scholarship that I haven't kept up with, most of it in German - but I'd be interested in talking to some of the younger scholars who are now working in the field.

Finally, one of the things I do is co-edit a website on comics, FA - The Comiczine. I've been writing a lot of reviews for it in the last few months. I've also written a couple of features, one on Batgirl, and one, which I'm particularly pleased with, on 1940s patriotic superheroes. I think we're doing good stuff with the site. It will never be comprehensive, but I think we've got interesting things to say (and we are always on the lookout for new contributors).

So that's my round-up of the last eighteen months. 2014 should also be a productive year - there are five chapters in books that are currently in some form of completed text, and should come out over the next twelve months. I'm also giving a paper at the academic track of Loncon 3, the 2014 World SF convention. And I'll try to post more here.
Posted by Tony Keen at 5:51 PM